It would be difficult to find three better golf courses in one location than you’ll find at the Resort at Glade Springs.

Located in Daniels, W. Va., in coal country, Glade Springs could easily be missed by the Georgia Golfer. That would be a shame – and a mistake. Glade Springs deserves high marks for the high level of its three courses as well the accommodations and amenities that go along with them. 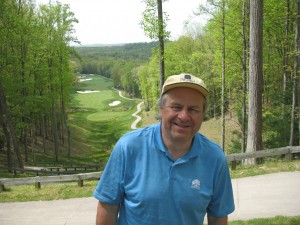 Standing at the precipice before an attack on the 16th hole.

The centerpieces of the Resort at Glade Springs are the three golf courses: The Cobb Course, Stonehaven and Woodhaven.

The Cobb Course is the oldest and most traditional. It was designed by famed architect George Cobb and is said to be the only course that bears his name. Cobb designed more than 100 courses, including the Par 3 Course at Augusta National, before his death in 1986.

Opened in 1973, the Cobb Course is a traditional parkland style layout. It plays 7,131 from the tips to par 72. The layout takes you through a series of tree-lined fairways that demand accurate tee shot s. Failure to keep it straight means you’ll be playing pinball with the trees or pitching out sideways in order to play on.

The Stonehaven Course (played by the Georgia Golfer) was built by Tom Clark and opened in 2003. Stonehaven plays 7,203 yards from the back tees (which should be reserved for scratch players) and plays an enjoyable 6,215 from the white middle tees.

Rarely can you say that there isn’t a bad hole on a golf course. But that can be spoken with a straight face at Stonehaven. There is not a bad hole on the course.

Mark James, the club’s PGA professional, came to Glade Springs from a course in south Florida. Some of his former members once made a trip to visit and one remarked to James, “I couldn’t wait to get to the next hole.” The course does create that sense of anticipation.

Stonehaven is framed well. It is a visually appealing course. There’s nothing tricky about it. The layout will tell you where to put your next shots.

One of the interesting features of Stonehaven is the use of natural material to fill some of the large bunker areas. The black, gritty stuff is known as “slag” and is treated like a waste area. It’s not a hazard, so it’s OK to ground your club in there. The black pigmentation of the slag is one more source of distinction at Stonehaven. And while it looks cool, it’s probably a good idea to stick your foot in there and test it out rather that hitting your ball into the area.

Some of the slag bunkers can be used as targets. So can the white sand bunkers. These often act as spots to aim for, as well as places to avoid.

Perhaps the most spectacular hole on the course is the 16th, a long par 5 that plays 601 yards from the back tees. No one has ever reached the green in two shots from those black tees.  When you leave the 15th green, you drive up a long hill and eventually emerge above the 16th tee for a spectacular view. At that point you’re probably 150 feet above the teeing area, as the hole opens up with wildflowers filling the areas around some of the tees. They say visitors like to drive to that spot in the fall and take photos of the colorful foliage.

The 16th is a great three-shot par 5. If you can steer clear of the fairway bunkers and produce three solid shots, you should be able to get home and make par.

The latest addition to the Resort at Glade Springs is the Woodhaven course, designed by Clark and opened in 2010. This course is one tough hombre and deserving of its lofty slop rating of 155.

The Georgia Golfer got a look at the first and 18th holes at Woodhaven. The carry from the first tee looked quite daunting, with a long carry over water. The 18th (which requires a 260-yard carry from the back tees just to reach the fairway) leaves you with a long approach to a target in the fairway, which gives you a chance to fire uphill to a green that juts out.

One staff member said Woodhaven is a course that must be played several times in order to understand where to hit and miss.

The Resort at Glade Springs is ideal for a buddy trip. There are guest lodges that have four separate bedrooms on two levels and can comfortably sleep 16. These are usually sold out during the middle of the busy season. The resort’s affordable packages feature an all-you-can-play model, with some guests rolling through 54 holes or more in one day.

There are plenty of good eats at Glade Springs, too. The family-style Italian feast features enough food to feed a small army of golfers (certainly enough for your buddy group) with plenty of leftovers. They keep rolling out tray after tray of food until you finally surrender. The activity center has an indoor pool, a large workout facility and weight room, a cinema and a 10-lane bowling center.

Those who haven’t heard of Glade Springs will be happy that someone clued them in. Once you see it, you’ll want to come back again. It’s really that good.